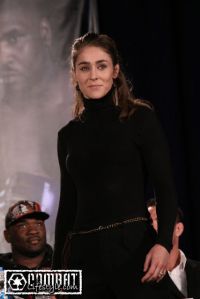 Newly-crowned Strikeforce’s 135-pound champion, Marloes Coenen defends her title for the first time against Miesha Tate at Strikeforce: Columbus. The event takes place on March 5th at the Nationwide Arena in Columbus, Ohio.

Marloes Coenen got her first shot at Strikeforce gold in January of last year against the 145-pound juggernaut, Cristiane ‘Cyborg’ Santos. Although she suffered a TKO loss, Coenen was awarded a title shot at her natural fighting weight against Sarah Kaufman. Coenen took the title from Kaufman after locking an armbar in the third round, forcing the tap.

Miesha Tate earned a shot at the title after winning a one-night four-woman tournament last August. She defeated Maiju Kujala in the opening round, and then went on to beat Hitomi Akano by unanimous decision in the finals. Tate has won nine out of her last ten fights, dropping a decision to Sarah Kaufman in May of 2009.

Posted by Matt Faler on January 31, 2011 in News, Strikeforce

Posted by Matt Faler on August 15, 2010 in Quick Results, Strikeforce